After a Europe-wide invitation to tender for the delivery of flat screens for the Bundeswehr and the roda computer GmbH in Lichtenau. 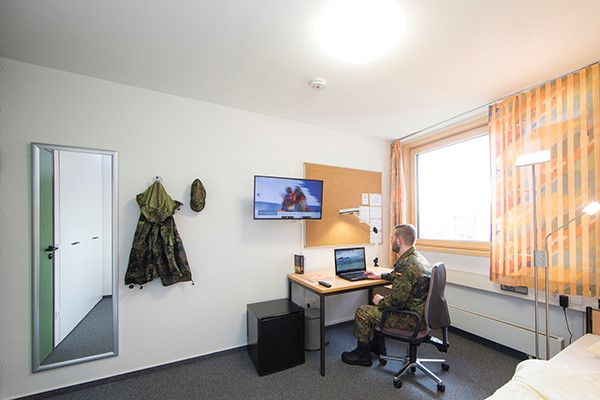 roda computer GmbH, based in Lichtenau near Baden-Baden in the State of Baden-Württemberg (Germany), is at the forefront of outfitting the German Armed Forces with robust, state-of-the-art computer technology. The company announced on July 22 that it was selected, in the course of a European-wide tender, to deliver up to 21,000 Samsung Hospitality flat screens to 45 Bundeswehr Service Centres under the auspieces of their initiative for increased attractiveness (Attraktivitäts-Steigerungsprogramm). According to the contract, delivery of the flat screens, featuring a diagonal of 32’’ and 43’’, will be fulfilled within the next twelve months. The Bundeswehr Service Centres will then make available the equipment to soldiers’ rooms. roda’s project lead Adam Skowronek informed that roda won a contract for 60,000 Samsung flat screens in an earlier tender, with the delivery taken place between 2015 and 2018. With the renewed order, roda was successful with its price-performance ratio, outperforming four competitors in that segment. He added that the new order will be a logistical challenge, but the firm’s experience derived from the first order will help master the new project.